For this year’s Team Championships we were pleased to add an under 14 team, to our already established under 18 team from last year.

Not as simple to select 16 junior players from Bristol and Gloucestershire as you might think !

The under 18 team were represented by Oliver Stubbs, Ian Gao, Jack Tye and William Mullaney, as from last year, plus newcomers Finn Goodhew and Dan Seymour.

The Under 14 team were of course all newcomers, and they consisted of in board order:

After a short trip over the bridge to Chepstow we arrived for a 11.15am start. Unfortunately (because of me) half of the under 18 team arrived  late…  only 5 mins before the start !  We rushed in, found our team room, and then quickly made for the playing hall. Our under 14’s were already there, and with the help of their team Manager Nigel Hosken were searching for their board numbers and whether they were playing as white or black. The format for the day was three rounds for each player, with a time control of 25 mins plus ten secs increments.  There were sections from under 9 to under 18 with six counties taking part and over 200 players playing !

Whilst Nigel was managing the under 14’s Chris Beaumont was overseeing the under 18’s. It was great to have Nigel and Chris, as well as more players in the team room this year. This made for a very lively atmosphere in-between rounds. Both Chris and Nigel were going over openings and tactics, whilst David Kan was monitoring the scores as they came in one by one. 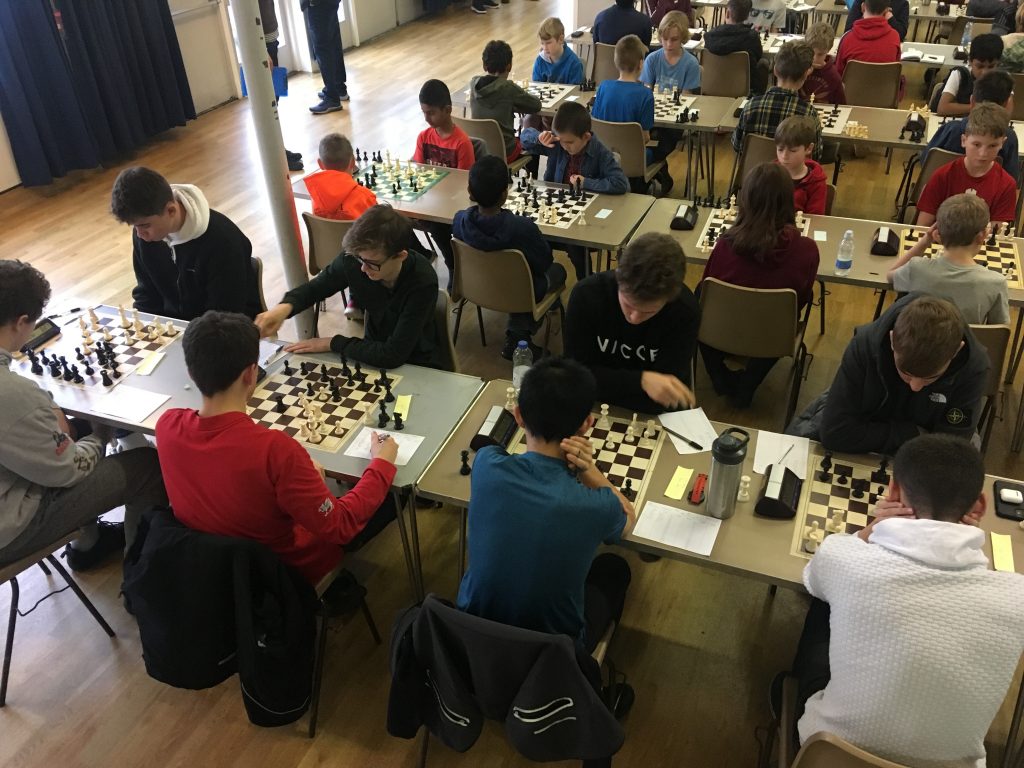 The opposition was tough with strong chess counties taking part, but we knew we had good teams, and our team spirit was terrific, with much encouragement and banter between the players. This was probably the most important part of the day, to get all the players  together as a team,  rather than as usual rivals across the chessboard. As games finished players rushed back to the team room to have their game scrutinised by Chris, whilst Nigel kept an eye on everyone in the playing hall.

There were  many parents there supporting their chess masterminds, making sure they were all fed and watered. During play parents took time to catch up with computer work, read, and make new friends.

After a hectic day, back to the team room for totting up the scores, announcements and congratulations for all the players, parents and organisers. Whether experienced or not all the team left with new chess skills and friends.

Finally off to the tournament hall for the prize giving. We had no idea where we had finished and whether the players would be going home with medals or not. The results were revealed section by section and first of all we learnt that the under 14’s had come 2nd (by half a point), a great result , especially as we had several players aged just 10 or 11 ! Then lastly the the under 18’s, and again we finished in 2nd place, another fine result.

Hooray.. medals for all !

A special mention for  under 14’s Bilal Ahmed and Aron Saunders, for both scoring a tremendous 3/3.

I would also like to say a thank you to William Mullaney and Oliver Stubbs, who have been real stalwarts for the Gloucestershire under 18’s and Millfield team for the past two years. As they move on from being juniors, I know we have plenty of new talent behind them

Finally I would like to thank the Bristol & District Chess League as well as Downed & Fishponds Chess Club for their financial support and help making it great success for our Bristol and Gloucestershire “Young Guns”.

This site uses Akismet to reduce spam. Learn how your comment data is processed.